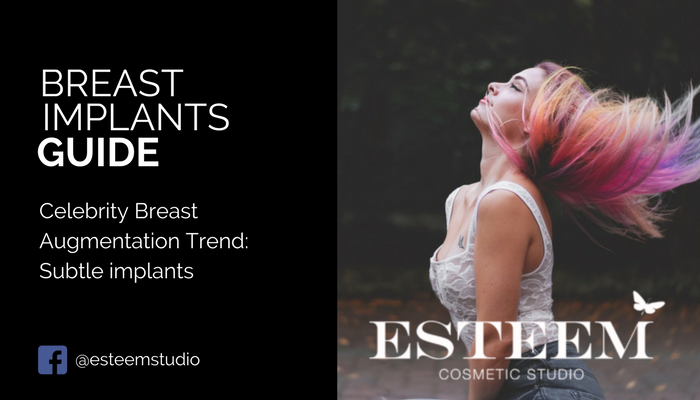 A lot of times when celebrities get some type of plastic surgery, we notice.

Her lips weren’t always that plump and there’s something about his nose is quite a bit smaller than it used to be. But recently, there’s been a new trend circulating the world’s most popular people – subtle implants.

When you think about breast augmentations in Hollywood, the mind tends to drift to jobs that are a bit more in-your-face instead of subtle. However, these days it appears that celebs are looking for a little bit more of an au natural look. But what exactly is a “subtle” breast augmentation? We’ll tell you – who knows, maybe you’ll be in favour of this trends after reading this!

The stats behind the subtle boob job

Big breasts are slowly on their way out as they need to make room for the growing population of a smaller, more athletic look. We’re talking changes so minute it’s hard to tell whether the celebrity in question went under the knife, or just gained a convenient amount of weight in her breasts.

The subtle boob job is just a mini implant only meant to take the breast up a single cup size or just to fluff up the cleavage a little. In fact, doctors have found that when their patients are coming in for consultation, a good majority of them are asking for a smaller breast size.The appeal with opting for a smaller bust is that it’s a bit easier to dress in all occasions.

The best celebrity boob jobs have paparazzi wondering, are they real or fake? Of course, celebrities don’t always go under the knife and tell, so we’re often left speculating. For instance, there’s recent speculation that pop star Taylor Swift, a girl who’s been known for her big voice but small chest, may have had a little work done. For Swift, this move would make sense – she has a naturally lanky, body, so breasts too large would look a little off!

We’re also curious about other celebrities like Jessica Alba, Miranda Kerr and Nicole Richie. What do you think?

You can make everyone wonder too when you get your breast augmentation done by our team here at Esteem. Contact us today to set up an appointment and review your options.