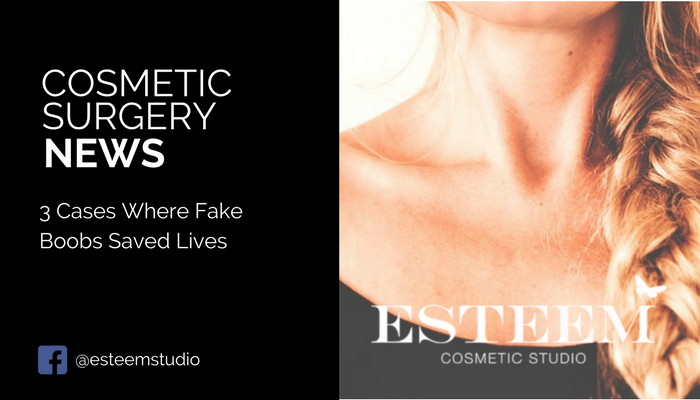 Breast implants are usually a life-changing decision, but in the case of these three women, they were also a life-saving one, too.

“Thank goodness for my fake boobs.” That’s definitely a sentence you’ve likely not heard before. Well, for the case of three women going about their lives, these six words were definitely at the front of their mind after a near-death experience.

Here are three cases where their breast implants saved their life.

Battle of boob vs. knife

Back in 2011, a Russian woman and her husband got into a physical fight. During the argument, the husband produced a knife, and thrust it at his wife’s chest.

Typically, a knife would have caused serious damage. But for the case of the victim, she was sporting size four breast implants, as a request from her husband five years prior.

The knife, aimed towards the heart, was intercepted by the implants, made of state-of-the-art silicone. Proving their quality, they managed to retain their shape without leaking, all the while preventing the point of the knife from causing any damage to her vital organs.

She was able to have her boob job patched up shortly after the incident, and we can only assume how thankful she was to have gotten a breast enlargement.

Although the main material in bulletproof vests, Kevlar, was first invented by a woman, Stephanie Kwolek, you’ll be hard pressed to find the average female wearing one, especially while driving around with their boyfriend. For one Canadian woman, Eileen Likness, her breast implants worked just as well.

Fake boobs aren’t necessarily bulletproof, but for Likness, they were close enough to save her life. She’d just dropped her boyfriend off on a side street after driving him around for hours, when he turned around and fired two bullets straight at her chest.

Luckily for Likness, they were buffered by her fake boobs, with one bullet even passing through both her right implant then the left one. She was left with no major injuries, only ruined silicone implants.

As for her boyfriend, he was later picked up by police and arrested for his crimes. Likness had to testify against him for attempted murder, explaining how her breast implants saved her life and prevented serious injury.

As Australian as it gets…

The last case we take a look at today is something so bizarre, you’d expect to see it in a comedy movie.

South Australian resident, Sharon Heinrich, was just casually cycling along a tourist route with her friend when they were both attacked by a large kangaroo. He knocked them both off their bikes for no apparent reason, before bounding off, seemingly unhurt.

And as for Ms Heinrich, she’d broken three ribs in the ordeal, but it could have much worse had it not been for her breast implants. Through the force of a kangaroo landing on her body, the fake boobs had acted like airbags and cushioned Ms Heinrich’s fall.

Luckily, both women were able to get help and recovered from their non-crucial injuries. Ms Heinrich was able to get her boob implants replaced within a week.

Hopefully, you won’t ever have to experience anything as drastic as a life-threatening incident, but if these cases have left you inspired to get a breast enlargement, feel free to reach out to our team for more information.

We can’t guarantee that they’ll cushion your falls or stop the trajectory of bullets, but what we can be a bit more confident about is that your self-image will blossom, as well as your bra size!

All in all, we’re open to the idea of couples surgery. Give us a call or come in for a consultation to get more information.